In the article below:

Overview
SMR FK Tools
All articles in this series

SMR FK takes away all frustration and uncertainty from the default behavior of Flash / Animate tools. Selections become precise, fast and easy. Posing – enjoyable and intuitive.

SMR FK brings pleasure to animating and makes Flash and Animate relevant again in the second decade of 21st century.

SMR FK uses the great vector and tweening capabilities of Flash / Animate and provides a modern-day UX to an ever more demanding user base of animation professionals and enthusiasts.

SMR FK is all that Flash animators of the late 90s and early 2000s dreamed of and begged for, but never received from Macromedia or Adobe.

What does SMR FK bring to the animation process?

Flexible and reliable Forward Kinematics tools have always been part of EDAPT since the introduction of Smart Magnet Rigging in 2013.

Initially these were Smart Transform, Smart Magnet Joints and Clean Up – three commands which revolutionized posing with the Free Transform tool and allowed automatic generation of arcs.

Over the years all three have had their functionality polished to perfection, covering all possible chain selections and types of magnetic snapping.

Later on, in 2018, we introduced SMR KineFlex – a unique tool, specifically designed to work with Smart Magnet Rigs. It brought intuitive posing with easy switching between organic soft rotation and hard rotation – all in one interactive transformation assisted by a modifier key. KineFlex is so well-suited for character posing, so efficient and so enjoyable to use that it has become the preferred tool of all SMR animators.

SMR FK in its entirety is available as part of the free version of EDAP Tools.

How does it work?

The character has to be rigged as a Smart Magnet Rig, using one of the available rigging methods. This creates a hierarchical SMR structure, which is realized at the level of Symbol instance. The rig elements contain SMR info – metadata, describing each element's position in the hierarchy and its relationship with the others.
This metadata is then interpreted by the various SMR tools, such as Smart Transform, Smart Magnet Joint, Clean Up and KineFlex to create FK and IK* chains and transformations.

*Note: Inverse Kinematics is a feature available in the Premium version of EDAP Tools.

KineFlex is our revolutionary on-the-fly skeletal system, introduced for the first time in EDAP Tools v.4.0 in 2018.

KineFlex uses Smart Magnet Rig metadata (SMR info) to allow an animator-friendly, professional-grade implementation of a Forward and Inverse* Kinematics system, with bones that exist only during the current transformation and do not impose any rigidity or structural changes to the Classic Tween approach.

Essentially it is an instantly generated skeleton, which takes the current location and position of the elements as initial state (on MouseDown) and ceases to exist after the end of the transformation (on MouseRelease).
*Note: Inverse Kinematics is a feature available in the Premium version of EDAP Tools.

Smart Magnet Joints do not interfere with the traditional Flash / Animate workflow, but are always present and at a press of a button a dislocated limb is perfectly positioned again. Elements know where they should snap to whenever needed.
Smart Magnet Joints bring precision and unseen-before ease to working with complex multi-part rigs.

The knowledge that elements can always be brought back into position eliminates all stress. This allows animators to feel more relaxed and open to experimentation, which in turn yields better-quality results.
Similar to the invention of Undo and later multiple Undo, Smart Magnet Joints reduces the cost of any mistake to zero and in this way empowers creativity.

Smart Transform allows chain selection of all linked children (forward) or parents (inverse), placing the Transformation point of the selected group of symbols at the Registration point of the highest ranking parent for easier-than-ever posing.

It is the most natural and logical enhancement of the Free Transform tool in the context of the needs of a character animator, taking away all the guesswork where to put the Transformation point of a selected group of symbols, while saving all the time wasted to select multiple symbols and constantly drag the T-point after changing the selection.
Smart Transform saves the user from the need to do a huge number of unnecessary clicks and drags and allows to redirect this precious time and energy toward better and more polished animation.

Clean Up utilizes Smart Magnet Joint functionality and automatically adjusts the positions of child elements to move along arcs, once timing is complete and the animator is happy with the poses and dynamics.

It works on Classic Tweens and can even allow easy and efficient ways of getting overlapping action between keys.

SMR Helpers panel contains a set of buttons, which allow alternative access to various FK-related functions.
It also contains buttons, which trigger unique functions and can only be called from the panel. 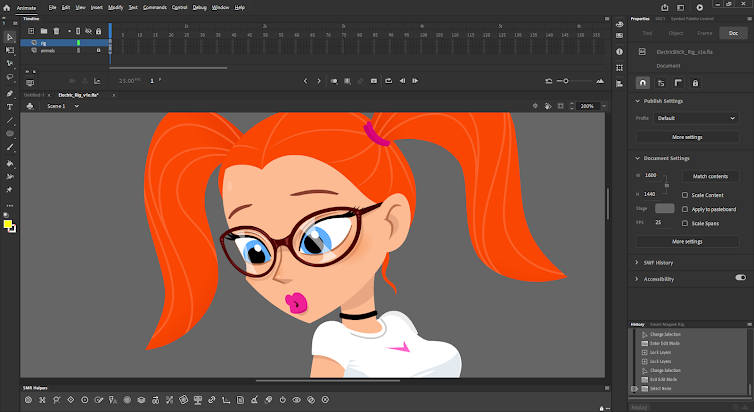 Continue with the next article in the series – SMR Inverse Kinematics.

All articles in this series: