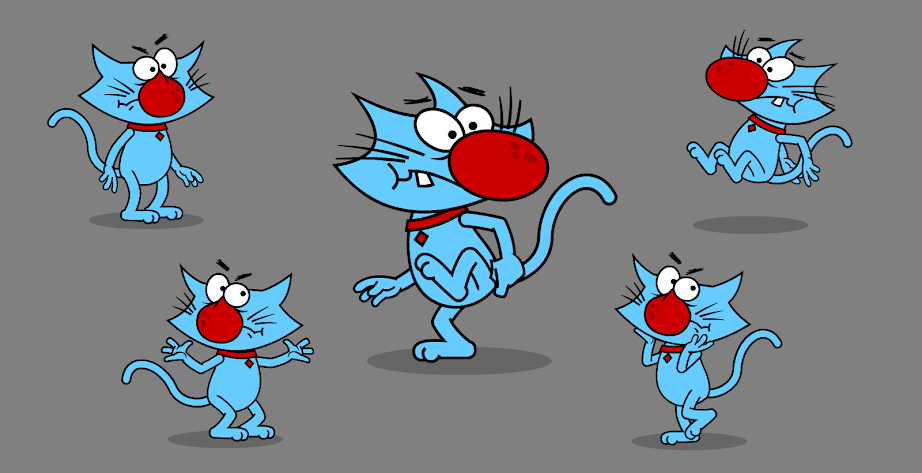 The ques­tion how to rig char­ac­ters with out­lines has popped up mul­ti­ple times.

This is an indi­ca­tor that there is a lot of inter­est in the top­ic and not enough infor­ma­tion avail­able from oth­er sources.
At times there were even some voic­es sug­gest­ing that, because our sam­ple rigs don’t have out­lines, SMR as a sys­tem can­not be used to design and ani­mate char­ac­ters with outlines.

This should be enough to jus­ti­fy the exis­tence of a short ded­i­cat­ed article.

In the world of dig­i­tal cutouts out­lines make life more dif­fi­cult and com­pli­cate every­thing. This is why a large part of the char­ac­ter designs (and rigs) don’t have any out­lines at all, or only have par­tial in the facial area, hands, feet and some wrin­kles here and there.

Both approach­es can be appeal­ing, but out­lines bring def­i­n­i­tion, con­trast, and unmis­take­able car­toony feel to char­ac­ter design.

Joint mechan­ics with or with­out out­lines is more or less the same.
Type 1 joints, based on two over­lap­ping cir­cles are the most wide­ly used, but even with this sim­ple and unbreak­able joint, we face com­pli­ca­tions, com­ing from the over­lap of the out­lines and the wrin­kle which forms because of this. Such a wrin­kle sug­gests vol­ume, and in most cas­es it is nec­es­sary to con­trol how deep it goes, and how it devel­ops while body parts fold and stretch.

With sim­ple car­toony designs, with thin, almost rub­ber­hose limbs it is pos­si­ble to have untreat­ed joints, and in most cas­es this will be styl­is­ti­cal­ly acceptable.

When untreat­ed joints are not accept­able, there are var­i­ous approach­es to mak­ing the wrin­kles look more organic.

Anoth­er option is exter­nal patching.
A patch occu­pies a lay­er above the top ele­ment, ani­mates in sync with the body parts, and part­ly cov­ers the wrinkle.
Patch­es are hard-weld­ed ele­ments of the Smart Mag­net Rig. They can be designed to reveal or cov­er a desired part of the inter­sect­ing line, and they do this dynam­i­cal­ly, which makes them very func­tion­al and low maintenance. 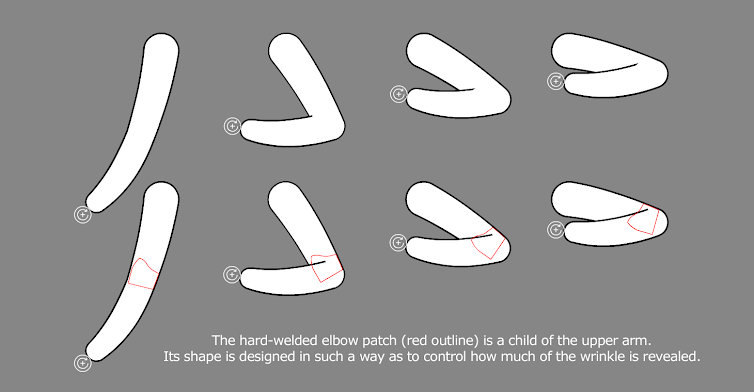 They are espe­cial­ly effec­tive with thin to medi­um-thick out­lines, where taper­ing of the line is not an issue.

Patch­ing needs to be done cre­ative­ly, and even though there are uni­ver­sal prin­ci­ples of patch engi­neer­ing and design, the specifics have to be decid­ed on a char­ac­ter-by-char­ac­ter basis, and will be depen­dent on each indi­vid­ual design, details and proportions. 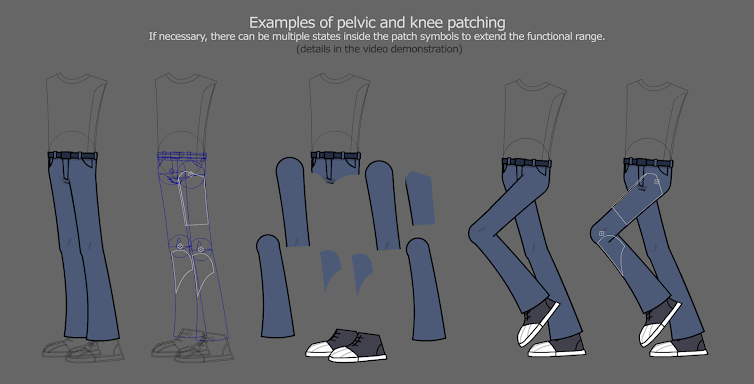 The fol­low­ing videos demon­strate how joints with out­lines func­tion, and show var­i­ous meth­ods of patching.

Please, down­load the Rab­bit sam­ple file and study that, com­bined with the series on rig­ging.

There is noth­ing too spe­cial about patch­ing. Just look into Ele­ment Welder to learn how to rig the ele­ments and hard-weld them after that.
Sim­ple patch­ing is very easy. Then you will have to exper­i­ment with the shapes of the patch­es if you want to have more con­trol over how the wrin­kle is revealed.