Below is a list of undocumented (at the time of posting) bugs and quirks found in various versions of Flash.
We shall keep updating this article when we come across more peculiarities.

Keyframe Labels slowing down playback to a crawl

If you, like us, very rarely preview your animation in the Timeline, since Timeline Preview is in most cases laggy, it is safe to turn labels on as they provide very useful visual information.

Labels do not affect SWF Preview in any way, and since SWF Preview is the only reliable way to see your animation as intended, we recommend getting into the habit of hitting [Ctrl+Enter] every time you wish to preview.

Below is the bug report that we submitted to Adobe on 30 Jun 2020.
There has been no acknowledgement of the bug by the Animate team to this day (23 Jul 2020).
To alleviate the issue in v.6 of EDAP Tools we made the convenience of labels optional and disabled by default.

One of our users contacted us yesterday with the observation of some extreme playback sluggishness with Cleaned Up frames.

After some investigation we determined the superficial cause - comment labels that we have been using for years to mark auto-generated keys - are slowing down playback in AA 20.5 ten times or more.

The image below shows the setup: 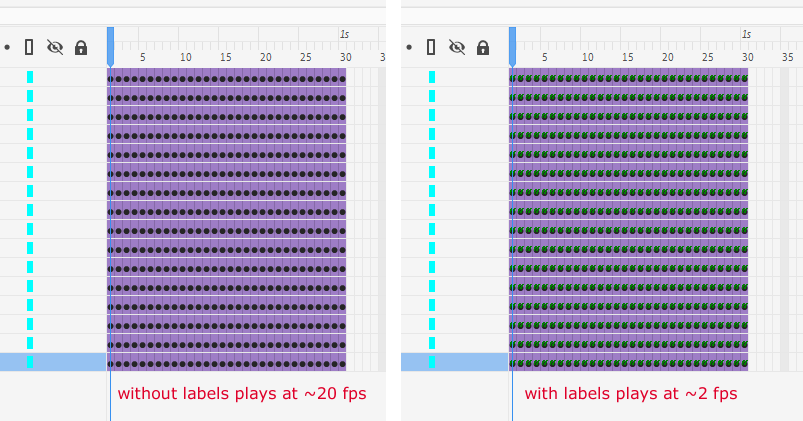 Here is a video that shows how to reproduce and describes the problem in detail.
It also makes a comparison between the payback in AA 20.5 and AA 15.2

It will be good if this is addressed alongside all other pressing performance issues.

Do you have any thoughts on the "new" (CC2015) motion editor? I find it next-to-impossible to use beyond the simplest ease or presets. Is it buggy, or is it poorly designed - or do I need to learn how to use it properly?

Hi Andy, I had a look at the Motion Editor in Animate.

It seems that they have really re-written it and the limitations are 'by design'. You can't do overshoots and apply custom eases as easily as you could in CS6. The graph is restrained between key1 and key2, similar to the restriction in the Classic Tween custom ease dialog.

In my work as a character animator I only find very limited application of Modern Tweens - mostly camera and MCs with Z depth applied for parallax.