The command can be invoked by pressing its dedicated button

in SMR Helpers or by choosing its menu entry from the hamburger menu in the top-right corner of Smart Magnet Rig panel. 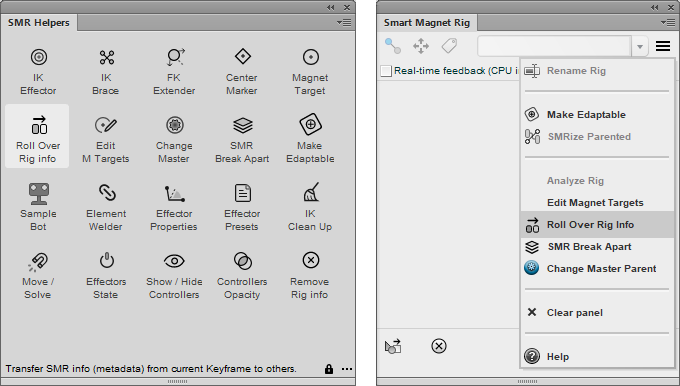 1. Multi-angle rigs, such as full trurnarounds, where one view of the character is rigged and then the Rig info is rolled over to the other agnles. (See video below)

Example: A broken rig has been fixed using Edit Magnet Targets or un-tagging and re-tagging of elements via the Smart Magnet Rig panel. All these repair works have been done at frame 1 of the current character timeline, but animation for the character already exists.
By applying Roll Over Rig Info to the right the correct Smart Magnet Rig metadata will be transferred to all subsequent keyframes and functionality will be consistent throughout the timeline.

Timeline or Stage selection. One or multiple selected symbol instances (Stage) or keys (Timeline), placed on one or multiple layers.

Only works when there is one element per layer. If elements change layers during animation, it is a good idea to roll over the rig information one element at a time and proceed with care. If elements occupy the same layers through the whole timeline the roll over can be safely done in one pass.