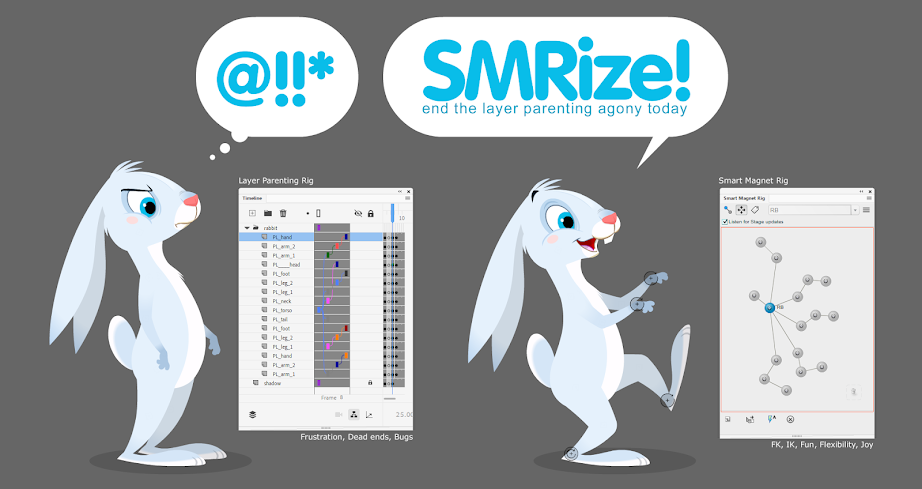 In the article below:

Adobe introduced Layer Parenting in Animate 2019 and although in the ads it all looked and sounded great, it quickly became apparent to everyone that the system is plagued with bugs and the implementation leads to too many dead ends to be a sturdy production tool. More than two years and several Animate releases later little has changed – flipping symbols on parented layers horizontally or vertically is impossible, temporary un-parenting to adjust the position of a parent in relation to its children is impossible and so on…

There is one thing, however, that Parented Layers (PL) do well – parented elements tween along arcs.

With the release of EDAP Tools v.6 we integrate Parented Layers into the SMR workflow.
Tweening along arcs is now an integral part of the EDAP Tools experience and Parented Layers (Animate 2019+) can be used as an optional Shell over the SMR Core.
To our users we provide a range of PL tools, which allow them to utilize all the benefits of Layer Parenting, while at the same time avoid all the dead ends.

In v.6 of EDAP Tools we introduce a number of tools which allow Animate users to utilize PL in their SMR workflows and also to easily transition from the very limiting Layer Parenting system to SMR ™.

Even though it is marketed as ‘Layer’ Parenting, it is important to understand that PL is realized as a Keyframe property. For example: If we have Symbol A on Layer A and Symbol B on Layer B, we can have a setup where A is parent to B and then in the next key B is a parent to A.

Such an implementation inevitably leads to all kinds of internal contradictions, but it also provides enough flexibility if carefully utilized by something well-structured and better designed, like SMR.

At the end of the day all that really matters is that parented elements tween along arcs and EDAP Tools users can now take full advantage of it.

Integration of Parented Layers (PL) is realized as an outer wrapper, a PL Shell, which is added to and removed from, an ever-present SMR Core.

What does adding a PL Shell bring to the animation process?

Adding a PL Shell over the SMR Core is done with the sole purpose to have Classically tweened elements move along arcs.

Although the idea of total Layer Parenting might seem good at first, the animators soon run into all kinds of situations without exit and need to un-parent. Good practice shows that PL is best applied only to specific elements during specific tween spans, where dislocating of joints becomes too obvious. In all other circumstances it is more practical to leave the elements independent and maintain flexibility.

How does it all work?

Layer Parenting hierarchy can be automatically generated, based on the Core SMR hierarchy, effectively allowing for the Layer Parenting Shell to be toggled on and off with the press of a button.

For users who have prepared their rig as SMR, Parented Layers provide an alternative to the classic Clean Up command – when the PL Shell is activated, the parented elements will tween along arcs.

For new EDAP Tools adopters who have started their project with a Layer Parenting rig and want to upgrade to the far superior SMR system, we provide an avenue to do so very easily – the SMRize Parented command, which can be invoked by pressing the dedicated button

in the SMR Helpers panel. It will automatically convert your PL hierarchy into a Smart Magnet Rig and from that point onward you will have a fully-functional SMR Core and will be able to use all the SMR tools.


PL and SMR tools and interactions

When utilizing the advantage that Parented Layers provide it is very important to keep in mind the SMR Core / PL Shell metaphor.

Some of the SMR tools can penetrate through the PL Shell and interact with the Core, while others will be obstructed by it and the PL Shell has to be unlocked to allow direct access to the SMR Core.
Default Animate tools, such as the Selection Tool and the Free Transform Tool always interact with what is currently the superficial layer, i.e. if a PL Shell is present, they will select and transform the parented objects.

SMRize Parented automates the upgrade from a Layer Parenting rig to a Smart Magnet Rig ™.

in the SMR Helpers panel. The script will analyze all elements, re-register them if necessary to make them Edaptable, and then proceed adding Center Markers and Magnet Targets, and tagging them with SMR info.
If you have more than one Keyframe in your timeline it will also Roll Over the Rig info so that your whole animation is SMRized.

When complete, you will have a fully-functional SMR Core and you can start using all the SMR Tools.
From that moment on, whenever you like, you can toggle Layer Parenting on and off, using Layer Parenting Toggle (SMR).

Layer Parenting Toggle uses the SMR info to create a Layer Parenting hierarchy (PL Shell) at the press of a button. If such PL Shell is present in the current keyframe it is released, i.e. the elements are un-parented.
The command works with either a Stage or Timeline selection and can parent whole layers ; or specific frame spans Alt+;frame block.

When layers are parented a prefix (PL_) is added to layer names to serve as quick visual indicators.

Layer Parenting can be toggled on or off very easily and best practice suggests that it should only be applied to frame spans where dislocation of joints becomes obvious.

Smart Magnet Joint is fully functional through the PL Shell.
The command’s behavior is identical with or without the PL Shell.

Smart Transform is fully functional through the PL Shell.
The command’s behavior is identical with or without the PL Shell.

KineFlex needs direct access to the SMR Core.
In most cases KineFlex will be able to penetrate through the PL Shell and interact with the SMR Core right away.
In some rare cases, however, the first KineFlex click will need to unlock the Shell and after that the tool can be used as usual.


How to use a PL Shell

The video below shows what can and what cannot be done while using a PL Shell, outlines some good practices to cleaning up disjointed elements during Classic Tweens, and presents practical alternatives in various real-life animation situations.

All articles in this series: