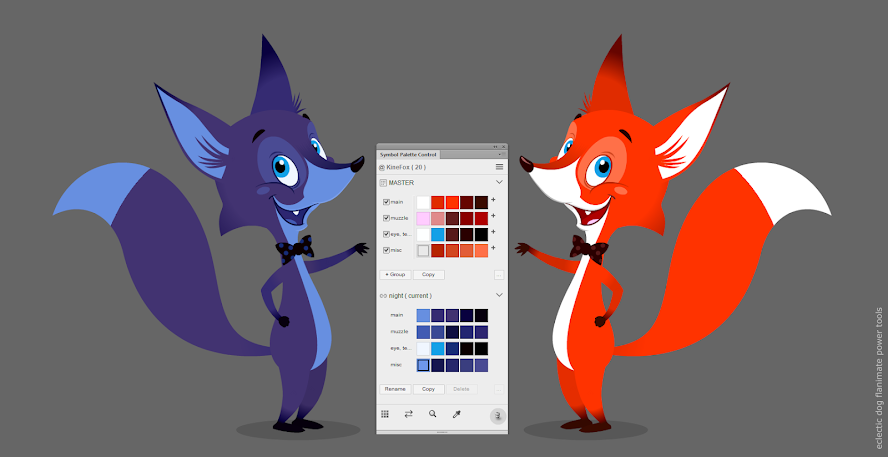 Interactive panel which allows users to create multiple color palettes associated with a Symbol and then switch between these palettes.
Color palettes can be copied (cloned), modified with color effects, reorganized, saved as files or loaded from a saved file.
Palettes can also be optimized, by unifying the color of similar swatches, thus reducing the overall number of colors.
Color swatches can be modified individually, grouped, regrouped or excluded from color swapping.

Color palette information is written as metadata into the Symbol Library item.

2. Color optimization / reduction
Another usage scenario would be color optimization, when reduced palette is preferred, but originally the design was created using many nuances.

Example: Fox has 12 different variations of orange in a multitude of elements.
A palette is generated and then the closest orange colors are separated in groups where the nuance that will be kept is put as the first color of each group.
The palette is then cloned and the clone is modified. Ctrl-clicking on a group name will invoke the Unify Colors dialog. When pressing OK all orange colors in the group will become the same as the first one.
Then the Master palette is swapped with the modified clone. The set is after that deleted and a new set can be generated which will have fewer unique orange colors.

One selected Symbol in the Library

Palette Sets are created and managed within the panel itself, but stored as metadata within the Symbol or exported as files.

Symbol Palette Control requires Flash CS4 or newer, i.e. does not work in Flash 8 or CS3.

Performance in CS4 can be very slow in anything but the simplest of files. This is just how CS4 is – one of the worst versions of Flash to have ever been released.

Colors in Groups may not be processed during palette swap: Shapes in groups may fail to be re-colored, depending on the content of the Group and also how deep it is nested.
Avoid using Groups and use Unions, Layers and Symbols instead.

AnCC 2019.x on Mac OS Mojave only: Color Pickers do not work. Users need to pick color using Animate's default tools prior to invoking a picker dialog, copy its hex value and paste into the color field. This is not an EDAP Tools issue, but rather a problem of Animate in Mojave.
We have reported this to Adobe and hopefully it will be fixed in the upcoming AnCC 2020.

Top:
Symbol name when palette is loaded. In brackets – number of swatches in the loaded Master Palette.
Menu with various selection options:

Buttons at the bottom:

Like us on Facebook
Foundational articles
Recent posts
Testimonials
Nina Paley
I’m finally using your Flash Power Tools, and they’re fantastic. Just one suggestion – put a “donate” button on your site! Or a Flattr button, or something. I like to support Free software, even if it’s with just a few bucks.
Justin Kupka
The Electric Dog Flash Animation Power Tools (EDAPT for short) is a new technique for rigging character within Flash that dramatically speeds up animation workflow. ... With the old way of animating in Flash you would have to select each individual piece and move it into position on every frame. This gets even more messy if you were to add a tween to those objects. With the old method, if the arm was hanging beside the character, and he raised it up into the air, all of the pieces would move in a straight line from point A to B. ... With the Magnet rig setup all you have to do is go to one of those in between frames. Set a keyframe, and hit the ~ key and it will snap all of the objects back into place! Read More...
David Shumway
Amazing tools. Changed the way I use Flash from fun but frustrating, to just pure fun
Sebastian Zegers Risopatron
This looks very thorough, thanks a lot! it's very hard to find articles that are as in-depth and professional as this, great work!
Raven
I found this site by accident but I'm glad I did. Thanks a ton this will really help me. I'll be coming back!
Andre Guindi
A gift from the heavens! Next Frame in Symbol/Prev Frame in Symbol shaved eons off from the animation process!
Daniel K.
This is one of the most useful tools for flash animation. Makes character animations a breeze. The learning curve is pretty small, and once you get used to it – you can’t live without it…at least in Flash Very good work gents, thank you!
Waqar Rasool
I am an artist and a 2d animator and have been using Aftereffects and Flash for my character animations. Your toolset and this help article is AWESOME! Thanks a lot
Lucas Gonzaga
You’re the best! Perfect Tools. Thanks!
Charlie
Wow, EDAP tools is an incredible find! So many scripts that speed up my animation workflow! It allows me to focus more on my animations, and less on the technical side of character rigs! Also, the developers respond to feedback/bugs immediately! Thank you so much for creating this package! I’ll be sure to spread the word!
Brian NS
Great job on the Electric Dog Flash Animation Power Tools – this is one complete set of tools that I use a lot for my flash animations. I’ve tried a lot of individual plugins and they work well on their own but it’s so good to have a solid base of components in one package.
Chris Dean
Thank you so much for this insightful compilation! I normally do 3d animation, but had to transition into 2d for a project I’m working on. This lesson probably improved my upcoming project 10-fold, and made the subsequent projects infinitely easier. Wonderful work!
David Jablonski
Electric Dog Flash power tools really make Flash work so much friendlier than Adobe thought it should. It really solves so many of Flash's symbol short comings. Smart transform and the magnet rigs really speed up the animation process, and I know for a fact I couldn't have hit a few deadlines without these swell tools. It wasn't too hard to learn and the personal help I got when I couldn't get things to work was amazing. I just updated to Flash CC on a new computer without the EDAPT plug in and I only made it about an hour using plain old Flash before I had to stop, and get these power tools set up. Once you use these tools, you will not want to go back. And they're Free! Stop swearing at Flash and use it the way it was meant to be used. I'm a total cheapwad and even I had to donate a couple bucks because of all this product has done for me. Check it out!
Ryan
Just wanted to say thanks for such a comprehensive run down of an efficient Flash workflow. It was a huge help.
deek
Massive help to my Flash work in UNI. Thanks so much for this brilliant learning resource, there’s nothing like this out there.
Ajit Pratap Singh Rajput
is this EDAPT tool supporting in flash cs6? if yes then how?
Jesse Cunningham
Nothing but crashing for me. Animate CC 2017. Im not even able to make a magnets work lol. Need a clearly more introductory level tutorial. I would pay to get this to work as smooth as you guys do in the videos. This sucks hard!
←→