Interactive panel which allows users to create Thumbnails for each frame of the content of a Graphic Symbol and then to control the 'looping' setting and 'first frame' for a particular Symbol Instance, by clicking on the desired thumbnail. Properties such as Single Frame, Play Once and Loop can also be controlled simultaneously.

During the initial thumbnail creation, the panel assigns metadata to a symbol instance and later uses it to control it, which allows the users to automatically generate keyframes without the need to make a Timeline selection; to synchronize the instance with other instance(s) and to have all kinds of combinations where an object controls other synced object(s), but is also itself synced to other 'masters'.

A single instance on Stage or a single keyframe on Timeline must be selected for the initial creation of Thumbnails. After that no selection is required. The panel works in the current frame in the current Timeline.

Ctrl-click on the Create/Refresh thumbnails button refreshes the content of the currently loaded Symbol.
Shift-click on a thumbnail to hide from view. (Reload thumbnails to show hidden.)

Incorrect number and size of thumbnails (Flash 8, CS3, CS4, CS5, CS5.5 only)
In older versions of Flash thumbnail generation is affected by the settings chosen for the last exported PNG. Read more…

Thumbnails with solid background (Flash 8, CS3, CS4, CS5, CS5.5 only)
If you have noticed that thumbnails get generated with a solid background color (instead of transparent) and you cannot change this via Thumbnail Settings in the panel drop-down menu, there is an easy fix. In these older versions of Flash the image export is dependent on the PNG export setting in File menu. To change this go to File > Export > Export Image… and export one PNG, choosing “24-bit with alpha channel”. Flash will remember this setting. Then refresh your Thumbnails in SGC panel.

Lost metadata: (Animate versions earlier than 2019.2) Due to a bug in Flash CC and Animate CC the default Convert to Keyframes function does not retain the Smart Graphic Control (and SMR) metadata in the newly created keys.
To be able to use SGC in Flash/Animate, CC users have to switch completely to Convert To Keyframe Advanced.

edit: 5 April 2019. The issue described above was finally fixed in Adobe Animate CC 2019.2, released on 3 April 2019. If you have Animate CC 2019.2 or newer you should be able to use the default Convert to keyframes, Break Apart and drag in the Timeline to create keys without losing the Thumbnail and Synchronization metadata. 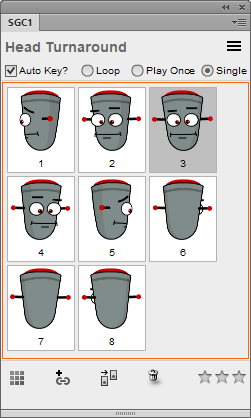 Top:
Panel Title – can be edited and renamed from the menu at the top-right corner (Thumbnail Settings…)
Menu with various selection options:

Below panel Title:
Checkbox for enabling or disabling the Auto Key function
Radio buttons to control the Looping setting at the key

Buttons at the bottom:

Multiple panels can be created and open at the same time

how to load multiple thumnails , please help i can load only one symbol in sgc
help us in loading more thumnail in sgc panel

Your graphic symbol has to contain multiple frames inside.
Please, watch the videos and follow the instructions.

If you want to use with more than one symbol at a time, create more SGC panels from the hamburger menu in the upper right-hand corner > Create New Panel.

Did I see somewhere that you can name the thumbnails? I'm specifically looking to name the mouth shapes. Thanks! Love these tools - so much to learn.

Hi John,
Thanks so much for the kind words! We're really glad you like the tools.

Unfortunately there is no way to name the thumbnails in the panel. No one had ever requested it so far.
You can make the thumbnails larger to see them better, if you need.

And here is a workaround how you can name the mouth positions: